So it is May the 4th be with you day, and also free comic book day. So there was some freebies for today which was great do to not spending.
I grabbed my sister and one of the nephews (Zander) as her other to were elsewhere, and we decided to check out one of our libraries. They had a few things happening so we decided to check it out.  As soon as we got there , we saw a girl all dressed up and I just had to grab her for a pic. Now I am sure we scared her  a little but apart from loving her outfit, I felt maybe it would make her feel good. She was younger and I basically forced her to hold Zach , which I think she has never held a baby as she had to ask how to hold him and she was a little shaky, but I assured here that he was fine.. Zach enjoyed himself and so did the young girl and her family. It takes nothing but happiness to help someone's day brighten up. 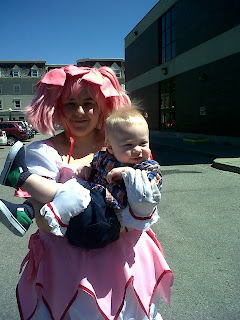 We hit the 3rd floor for the kids department (which I had to ride in an elevator due to the stroller= panic. I have been stuck in one before so they are not quite my friend). It was great freebies while we were there, plus there was barely anyone there which was so nice.  There was a cartoon and free popcorn, the kids were given a free comic(of course :) ), there were coloring pages , and the second to best thing was you got to make your own SuperHero Masks and arm bands. I of course made 1 of each for Zach and they lasted less than 1 min . So no pics but he did look cute for the 1 min he kept them on before he ripped them apart. Unfortunately the Spiderman Super Hero was there way to early in the day , so we missed him but we did manage to be there for Superman.. I am so glad we were there for that . Zach was soo happy, he grabbed at him right away, so the Man of Steel, scooped him up and got a few pics taken..
I will try and get ahold of the photographer who was there that took alot of shot of them together to get ahold of better pics, but here is the best I got.. 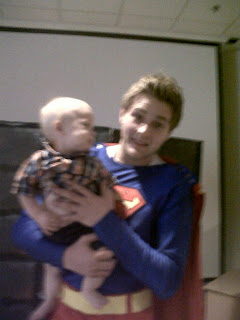 Zach crawled around, we tried to get him walking, he took a bunch of books off the shelf, which I feel bad for , but then again that is what librarians do is have to put them away in proper order. I would have put them away but they said no just put them on the table so that they go back correctly.  I did feel SuperHero ish having him there today for all the SuperHero stuff.
So we took off from the library, hit Giant Tiger , I did spend 3.00 but I needed a drink and a snack.. I was good beyond that I was about to buy food, but said no and stuck (mostly) to the no spend. Got a few things and then hit ChurchHill park for a little walk. I hadn`t been to this particular park in years and was a place I would frequent with my Grandparents when I was little. We stayed a little bit and headed home. Zach is of course asleep now and I am wondering if tonight he will sleep in his bed. Last night wa a bust, he went in for 5 min and that was it.. But then I figure maybe by the end of the month, a few min more and more each day, it just might work.
Apart from munchkin needing a bath , the night will probably be quiet, except trying to figure out what to cook for dinner .
Posted by Carey Hurst at 18:08