Yes it may be a rainy day , but that won't be stopping us form attempting to go to the Kinsmen Carnival at Riverside Park.
With of course at stop at Timmies to get the $1. 00 drinks we managed to make it just until the park opening and then the torrential rain pour hit. We of course had umbrellas and little man stroller was covered , so it just added that little extra adventure to the walk. We did know it was gonna rain and made the walk anyway , but then just an adventure in our day.  My mom, one sis and 2 nieces(not her kids, her boys got out of Grandmas van to walk with me ) were held up under a tent like thingy so once the rain subsided just enough we managed our way to the somewhat shelter. It was however a tent with those photo prop photo op cut outs and of course once all others( there weren't many) left the shelter some of the crew had fun and we grabbed some pics. 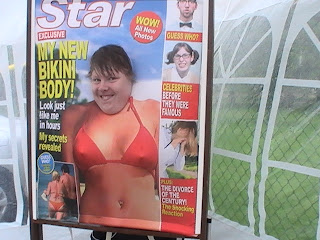 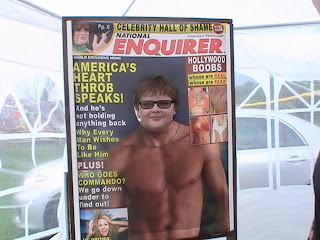 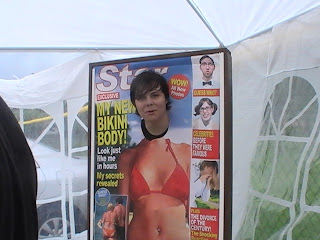 Def a disappointment from the rides stand point as the kids felt the rides were to short for the amounts paid, ticket wise, but the Kinsmen games were fun. At least you got to win everytime you played so spending the 2 bucks per game was well worth it . Little man got a silly Monkey toy and a football. I was hoping he would be in better spirits, but he was in the thrones of teething. I was glad he managed a few smiles, but he was def. out of sorts. He was also not able to ride anything so a little disappointing. Next year I am sure, but I just want him to be able to have the fun too. At this little age it must be so boring for them . Although getting to discover everything as it is new must be pretty cool, I can't imagine being dependant on me can be much exciting .
We had a bit of fun , boys got candy apples on the way home of course and made the trek back to Grandmas house . Bailey my nephew carried little man Zach all the way and he actually fell asleep, just disheartening that he feels so under the weather due to teeth, and he was still on fire.
Had thought of hitting Chuck E Cheese again today but decided against it. In need of helping out at my Grandparents house to make room for Nanas wheelchair to make it in so she can go home for a few hours every once in awhile.Glad to have 4 big boys to help so it gets done faster.Of course I really didn't do mych as I have little man to take care of, but all in all a good time. I let my Mom get out of there kid-less and took the whole crew for Fast Eddies Crazy fries and $0.99 pizza from City Pizza .