20th
Day out with Sister and Bestie.. We managed to make our way to the Weston s Bakery and holy crap what a crazy shop we had . I forgot about that place and how cheap it is and the crazy amount of stuff you can get there. We decided to make this a once a month trip. Both myself and bestie had 5 or 6 bags each and we each only spent 20 bucks, My one sis, with the larger fam and all the boys she spent 80 bucks but she can out with a crazy cart full. We def had a great time. Anything that means sale and we are all over that , esp for food that we would be buying anyway. We probably looked silly to the other patrons in the store bc you could hear our excitement as we found something at an amazing price, and I am pretty sure you could have heard us yelling to each other having split up at certain times and looking for the unique goodies. Interestingly enough we came out with stuff each that each other never saw. It was a case of OMG where was that ,or I can`t believe you got that . It will def. be a fun trip 1 a month anyhow and def looking forward to it .
It was also my Nephews Fun Fair and we decided to go . It was actually a great Fair for a school, there were some Midway rides and little things for kids to do. Of course the Silen tAuction as always, which in reality the funniest thing was the beer There was a 12 pack in the silent auction and ppl had allready had it bided higher than a 24, so we though that was a little humorous when many things had no bids.
Bestie and I took off early as I was taking all the bigger boys to the Mustang Drive -In .(Of course we did get lost on the way back trying to walk to my Sisters house, well just another Adventure) Man of Steel played (42 was the second movie but we only stayed for Superman) It was car load night so for 6 of us to see the movie for 17 bucks total , I am not complaining. I am hoping that the 2 cartoons out this year Monster`s U and Despicable Me 2 play the same night, def a night for my little man. I wanted to take him to the theatre for Despicable Me 2 considering how much he loves that show, but def not a chance. Much easier for us go to the Drive-In .
Of course no matter what still have to purchase their small amount of over prized French Fries( they taste amazing) and of course the 3.00 drinks. Yes we take in snacks and yes we can grab LOTS of drinks before hand for less the price , but the fact that you save so much anyway on the ticket price, I can justify getting over-priced concession drinks.
Man of Steel was a great movie for myself, quite enjoyable. Little man stayed awake most entire 3 hours of the movie and wouldn't sit still. But all in all it was pleasurable.

21st
Off to the beach with the family (well some members) , again the older boys except for one brother didn`t want to go, so okay but my Sister , Niece, Cousin and her month old little man came along. As always a stop off at City Pizza to get 1.00 slices and we made the trek. We decided on Valens. My little man as always was tearing it up as he just loves, loves, loves the beach.. 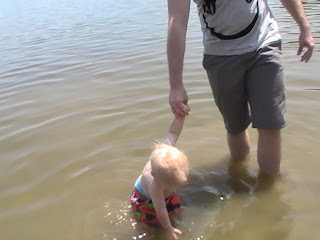 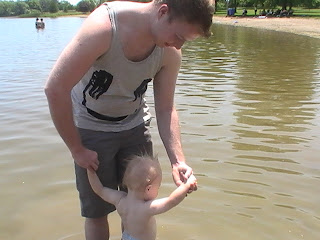 Little Man and his Uncle... 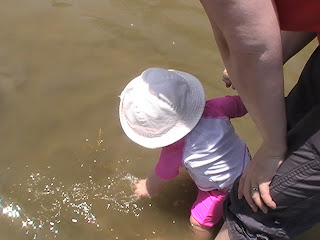 My Niece and Sister. 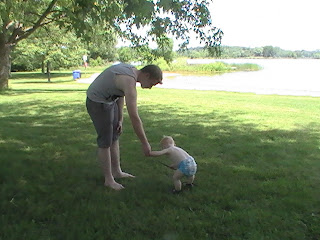 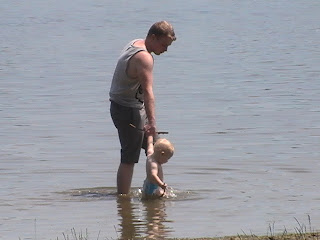 And of course he has a grip on the stick and I think that was seaweed in the other hand. 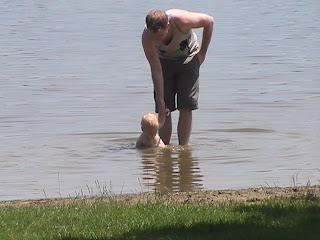 We were all craving a popscicle and just so happens that the mini tuck shop wasn`t opened. So there we go..We stayed for a little bit , but with little ones, a little bit is a long while. Not to mention of course how long it takes while trying to get ready to go and all packed up. I know my little man never wants to go , but soon enough when he is just a little bigger we could stay longer. Going to attempt a campout on night and lets see how that goes. He will of course be  `locked`in the tent once we zipper it up so maybe he will be able to make it through the night .