Those Birds who are Angry Home Edition

So I will admit that until this summer I had never even looked at the Angry Birds game. I had heard of it of course but never had a desire to check it out.
That changed of course this summer when my little one was introduced to the game, and thanks to YouTube we have entered a new world here in the WannabeSuperHeroMom household.
Of course I have downloaded all the free apps on to my tablet and will let little man play ( OK and mommy ) the games during the day.
I find that this is quite comical and the joy and laughter my toddler displays is enough for me . I am well aware we are getting on the angry bird train way late out of the gate but I am not one to follow , I make my own time. Lol.
I had some felt and batting, in the house and you can bet I made some piggies and birds for my little one so he could play and we can build our own play places to fling the birds and smash those piggies. 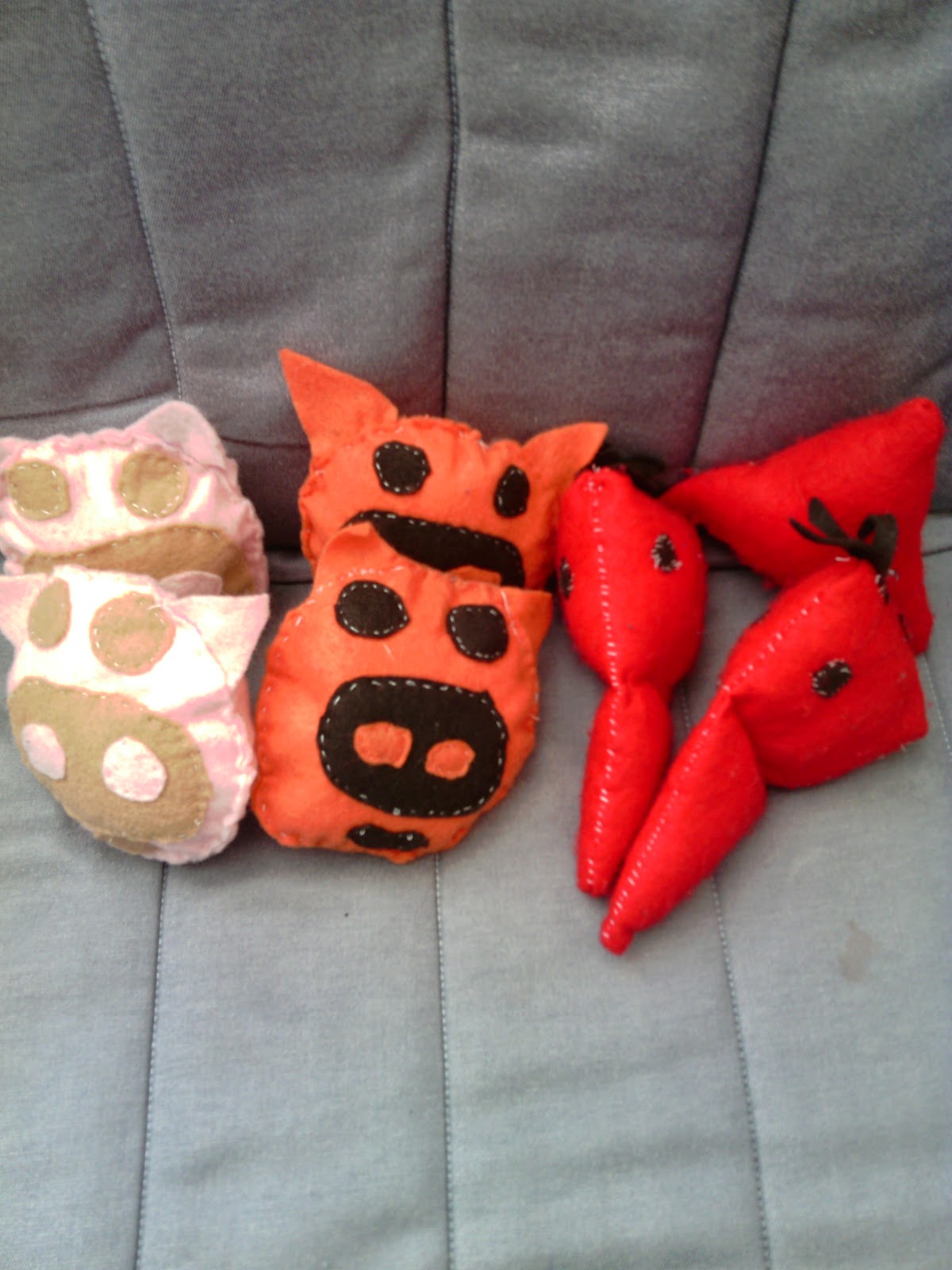 The look on his face not only while I was making them but once the set was done, I had such an ectastic , over the moon happy little guy. He sees them as the birds and piggies and no matter what they look like or the fact they are handmade, they are enough. I did become the Superhero Mom in his eyes for this one and what a beautiful moment it was. It was fun to say the least trying to get him to not grab or cry while waiting for them to be finished. I wanted to make them when he was sleeping and surprise him for Christmas but didnt work out that way, but worked out the way it was suppossed to in the long run.
He does have a few "real" toys, we were lucky enough to get a talking Red Bird from Eb games ( ok so I got it free from them last year and had no idea what it was really, but it was free and my lo played with it but until this past couple months we actually realized we had something cool , so how SuperHero Cool was mom when I found it in the bottom of the Stuffies toy box and showed him )
He was gifted a couple blind bags ( which had the Black Bomb guys in it ) from a friend for Christmas along with a tin bird bomb that held a puzzle .
On one of our very few trips out in Dollarama he found the Star Wars Set of the birds and it was only 3 bucks. So def check your Dollaramas for some stuff first if you are looking because you could be lucky and snag a find like we did. ( okay so I think someone hide it , but hey what find and finders keepers in the shopping game lol) 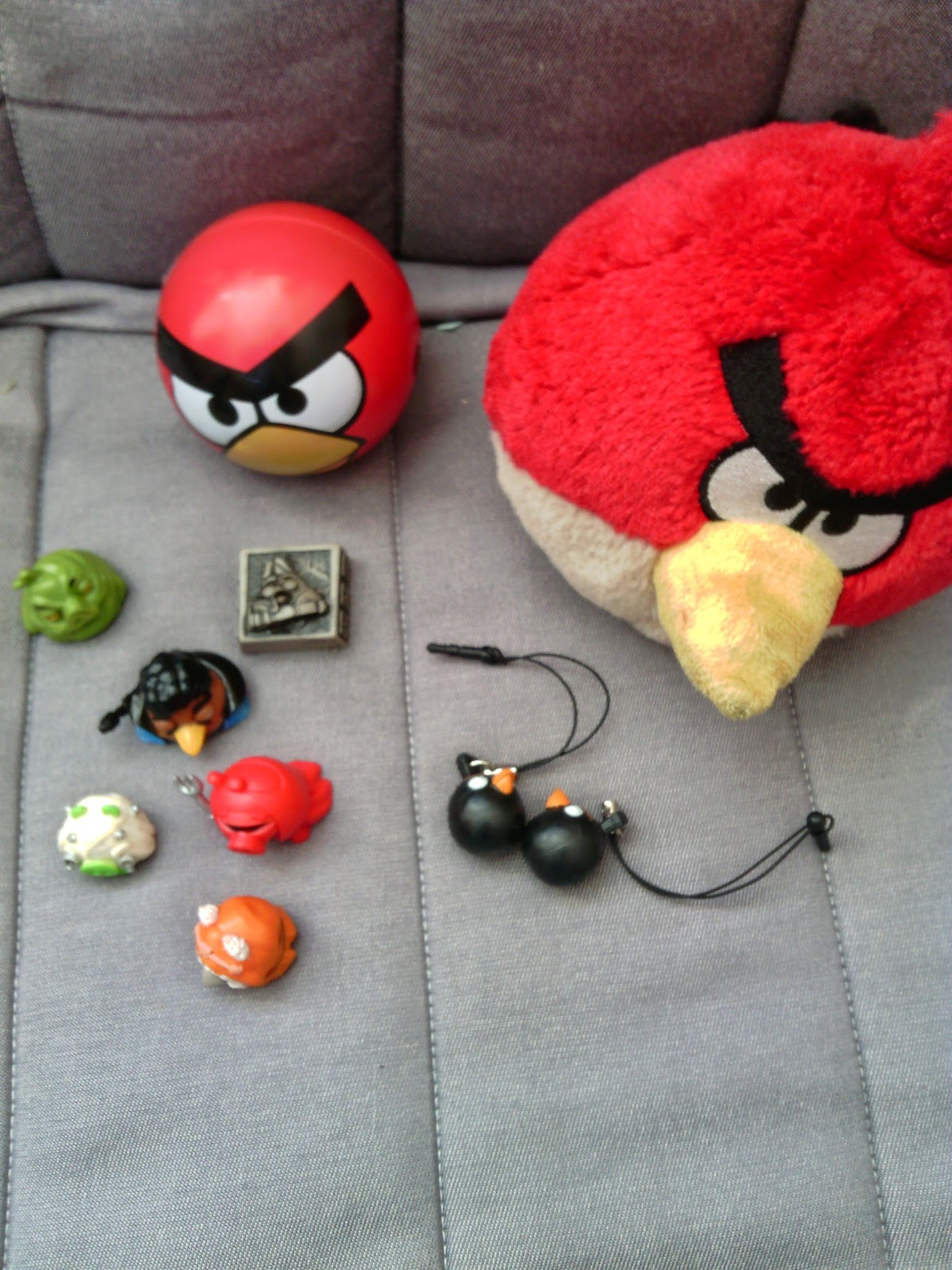 I have gotten a little addicted myself esp when he cant move a level so mommy helps , well when he lets me.
I enjoy watching his joy and he even talks to them while he plays with his toys. I am def an advocate for using imagination.

I have a feeling this is def one of those toy crazes he will be sticking with for awhile, looks like I will be getting some more crafting supplies and will make the entire set . I may even stick to the actual colors .
He sure does laugh hysterically when he watches the bad piggies. It is pure and simple joy and isnt that what matters no matter how you get there.
Posted by Carey Hurst at 14:18