When the Reaper Comes Book Tour and Giveaway 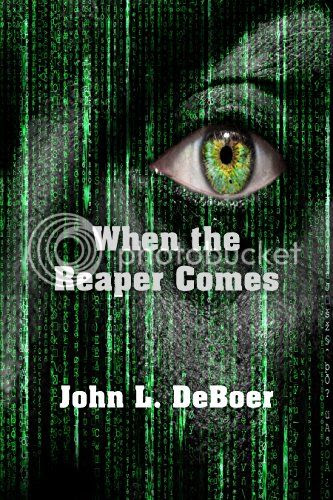 As the NSA gets a strong lead on one of the most prominent faces of ISIS, the Islamic State embarks on a bold course of action—an attack on American soil.
Former Navy SEAL Adam Taylor, on a break between assignments for a global paramilitary security firm, is visiting his folks in his home town when he gets a new mission—provide security for a rock star who is in town for a St. Patrick's Day concert. Unknown to Adam, a team of American ISIS soldiers will soon arrive with a plan to wreak havoc on the Jersey Shore, and Adam will get caught up in a deadly game of wits between the terrorist menace and those tasked to protect the citizens of the homeland.
Goodreads * Amazon

Len Briscoe loved his job. The Customs Border Protection officer grew up watching cop and PI shows on TV and had been fascinated by them. And when he discovered he had the same name as a main character in the old Law & Order series, he couldn’t have been more pleased. As a Customs agent at Port of Entry, Detroit, his career encompassed both law enforcement and, in a way, sleuthing. The best of both worlds, job-wise.
Every morning, he put on his uniform with pride and went to his station at the Ambassador Bridge, the span over the Detroit River connecting Windsor, Ontario to the Motor City, eager to fulfill his responsibilities.
On that morning, he had been on duty for an hour, when a dark blue Cobalt arrived at his checkpoint. Briscoe looked through the open driver’s side window at his next potential suspect.
“May I see your identification, sir?” Briscoe asked the olive-skinned young man. Mediterranean ancestry, he quickly assessed.
The man handed him his Canadian driver’s license and passport.
“This is a new passport, Mr. D’Agostino.”
“Yes, sir.”
“So is this your first time visiting the United States?”
“When I was a kid, I came here with my parents once. That was before the increased border security, of course.”
“What is the purpose of your visit?”
“I have a date.” The young man smiled, showing a set of white teeth. “A girl I met online. She came to Windsor for our first date, and now it’s my turn.”
Briscoe returned the smile. “Could be serious, huh?”
“You never know.”
“But serious enough to get a passport.”
“I always meant to get one. Now I have a good reason.”
Briscoe nodded as he perused the documents. “You still live at this address?”
“Yes, sir.”
“How long a stay do you anticipate?”
“I’m hoping for at least two days.” D’Agostino grinned. “You know.”
Briscoe stamped the passport. As he handed it and the license back to the man, he asked, “How do you think the Toronto Argonauts will do this year?”
D’Agostino paused for a moment before responding. “No idea. I’m not into hockey. Except for the Olympics.”
“Have a nice stay, sir.” Briscoe raised the gate, and as the man drove off, he wrote down the license number of the car and the Windsor address of the driver before he forgot it, though his memory for such details had always been excellent.
The man could just be completely ignorant of Canadian professional sports, Briscoe supposed. But a young Ontario man who didn’t know the Argonauts played football, not hockey, struck him as quite unusual.

Yusuf Khouri sighed with relief when he drove through the open checkpoint gate. The Customs guy’s question had thrown him temporarily. But he thought he’d handled it well, though the only Argonauts he’d ever heard of were in that Greek mythology story. And here he was, after all, back in the United States again.
The female voice of the GPS device told him of the next direction to take. Khouri shook his head in disgust. He knew it was just an impersonal recording. But so was the message that would chastise him when he mis-dialed a number on his phone. And those Viagra ads, with women telling men what they must do to have sex with them. American infidel men not only let women boss them around, they seemed to like it. That would certainly stop when the caliphate ruled the world.
He took the turn that would lead him to Massoud’s gun shop, excited to play his part in bringing the infidels down.

After graduating from the University of Vermont College of Medicine, I did my surgical residency in the U.S. Army at Madigan Army Medical Center, Ft. Lewis, Washington. I then spent three years in the Medical Corps as a General Surgeon before leaving the Army for private practice. Thirty years later, I retired to begin a new career as a writer. I enjoy cooking, tennis, politics, films and film history, the wonders of the cosmos, and, of course, reading. Thrillers is one of my favorite genres, so thrillers is what I like to write. My wife and I (mainly Diane) raised two sons we're proud of and who are pursuing careers having nothing to do with the medical field! After living in Pennsylvania for a number of years, Diane and I settled in North Carolina, where the winters are easy to take and the only weather we get antsy about is the occasional hurricane.

This Blog Not responsible for giveaway