excerpt reveal of HER SECRET BODYGUARD by Amanda Adams

EXCERPT
I made my way across the room and leaned on the wall next to the window, looking at her as I crossed my arms. "Angelina."
She turned her gaze to me, and the sadness in her eyes almost broke me apart.
"You care about all of these people. But who takes care of you?"
Her bottom lip trembled; I'd clearly hit a nerve. Hatred spread inside me for all those people—her uncle most of all—who only looked at her like a paycheck or an opportunity and nothing else. Had they forgotten she was a human being, too? Did they not realize that no person could keep doing what she did without burning out?
Angelina just shook her head. I didn't even think about what I did next; I was going on total instinct. Taking her hands, I moved her arms down from where she held them crossed over her stomach and put mine around her. She inhaled a sharply, but to my relief, she didn't push me away.
Trembling, she leaned into me, pulled me a bit tighter and nestled her head against my chest.
"You should have somebody who cares about you. For you." I caressed her cheek, where a blush was blooming.
When her lashes fluttered, I couldn't help myself any longer. Leaning down, I pressed my mouth to hers, and the touch of her silky sweet lips against my own sent fire raging through my blood. I wrapped her tighter in my embrace as she clutched at my shirt and moaned against me.
Within seconds, I was shaking as well. I hadn't planned on kissing her—and I sure as hell hadn't planned on kissing her like I wanted to claim her as my own. But it happened, and my head started spinning.
This was madness. Stupid. She was rich. Famous. Gorgeous. She dated race car drivers and movie stars. She was so far above my pay grade I shouldn’t even be breathing the same air. I was a former SEAL, a bodyguard sworn to protect her, not seduce her.
But my body seemed to have a mind of its own.
My fingers brushed against her jaw, urging her to open it for me. When she parted her lips, I exalted. Our tongues tangled, and I drank from her lips like a man needing water in the dessert. Whatever I’d felt with her before was long gone, replaced by something even stronger, wilder. More possessive. Instinctive. Needy—and I didn’t need anyone.
This was dangerous.
Focusing on her sweet lips, I ran a hand down her spine while she played with the hair at the nape of my neck. I was about to suggest we move to the bed, but a sharp knock on the door made her jump. I raised my head, and gently pushed her behind me just before the door burst open.
Immediately, I was in go mode, ready to take on anyone coming for her. As I turned to face the intruder, I was greeted with a familiar face standing in the door. I didn’t know her personally, but I recognized her from the entourage looming over Angelina every night at the arena.
"Angelina!" the woman cried out, her expression unreadable. I couldn’t tell if she was relieved or pissed. She gave a heavy, exaggerated sigh before hurrying over to Angelina to embrace her.
I moved toward the corner of the room, keeping out of the way on the sidelines. Back where I belonged. Lord knew I had no place among those land piranha. We had been lucky for sure. Her reflexes had been just as sharp as mine, allowing us to jump back from one another before the door had even fully clicked open.
But even as the rest of her leeches crowded around her, all I could think about was the softness of her lips. The more I reminisced about that kiss, the more I could still feel her lips on my own. The taste of her; her body curved against mine. Though I knew better, I found myself hoping that tonight wouldn’t be my only shot at those lips. I couldn’t help wanting more—she was perfect.
Another familiar voice echoed through the room, and my body stiffened. "Jesus Christ, that took forever." Angelina's uncle pushed through the crowd of people, but he didn't hug his niece. Instead, he stood there, hands on his hips, narrowing his eyes as he looked down at her like she was a child. "Really, Angelina? You couldn't have waited for us? You’re always so selfish."
Angelina was at a loss for words—but I wasn’t. I had several on my tongue waiting for him. But—I managed to keep my mouth shut as she said, "I didn't know—"
"Of course, you didn't! You never think, Angie." Her uncle tapped her on the temple, and she blushed in humiliation. “Never. Like I said… you’re selfish.”
I was going to take that fat rodent’s finger and twist it off if he touched her again. Slowly.
Breathe… just breathe. I gritted my teeth and told myself to behave. That maiming her uncle or punching him in the face wouldn’t help the situation. That this mess, this woman, Angelina, famous pop music star and her too beautiful to be real persona, was none of my business.
But she was. Like it or not, I was already involved—especially after that kiss.
Angelina needed someone to protect her. There was no walking away. Not for me.
As I watched her smile her fake smile and try to appease everyone around her, I made a shockingly easy decision.


She was mine. She just didn’t know it yet. 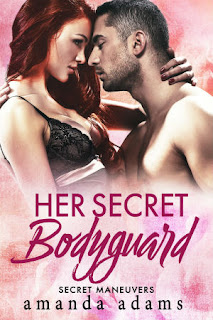