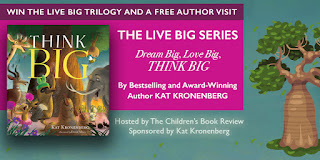 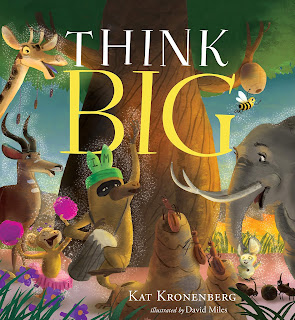 Publisher’s Synopsis: In the third installment in her Live Big Series, best-selling, award-winning author Kat Kronenberg takes readers back to the wilds of the African savanna where the animals not only still struggle to find food, but now they face life-threatening situations. They must fight to survive and are terrified.
But when our beloved moody Baboon challenges Kudu on what to do, everything begins to change. One by one, Kudu, Giraffe, and Bee are faced with the dilemma of who they want to be. After watching Bee choose to do good, Baboon figures out a new secret: We can light the stars in our hearts, empowering our lives, once we smile big deep within, truly believing in who we are, our ideas, and the importance of caring for others.
The danger continues to mount and Baboon finally gets so scared that he cries out for help. Luckily, some fun animals and Baobab Tree come to the rescue! Will they try the new SHHH secret so their collective ideas not only help all the animals survive but thrive together so that their dreams can come true?
Once again, Kronenberg creates a mythical evolution story of some of nature’s most fascinating characters to teach young readers foundational skills for life in this case, helping them build a loving community that knows the joy of gratitude, giving, and going for the extraordinary. Through playful dialogue and beautiful illustrations, readers learn to take a deep breath when life gets hard, connect their heads to their hearts, and celebrate their best lives as they problem-solve together. As with Dream Big and Love Big, Kronenberg includes hands-on activities at the end of the book and on her website. Her dream is that the whole experience will inspire young readers everywhere to learn to think big together.
Ages 2-8 | Greenleaf Book Group Llc | May 12, 2020 | ISBN-13: 978-1626347106
PURCHASE LINKS

Enter for a chance to win an autographed copy of Kat Kronenberg’s Think Big and a school visit from the author valued at $650!


Per FTC guidelines, I disclose partnership with The Children’s Book Review and Kat Kronenberg . 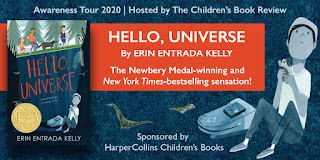 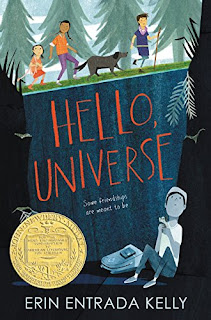 Hello, Universe
Written by Erin Entrada Kelly
Publisher’s Synopsis: In one day, four lives weave together in unexpected ways. Virgil Salinas is shy and kindhearted and feels out of place in his crazy-about-sports family. Valencia Somerset, who is deaf, is smart, brave, and secretly lonely, and she loves everything about nature. Kaori Tanaka is a self-proclaimed psychic, whose little sister, Gen, is always following her around. And Chet Bullens wishes the weird kids would just stop being so different so he can concentrate on basketball.
They aren't friends, at least not until Chet pulls a prank that traps Virgil and his pet guinea pig at the bottom of a well. This disaster leads Kaori, Gen, and Valencia on an epic quest to find missing Virgil. Through luck, smarts, bravery, and a little help from the universe, a rescue is performed, a bully is put in his place, and friendship blooms.
The acclaimed author of Blackbird Fly and The Land of Forgotten Girls writes with an authentic, humorous, and irresistible tween voice that will appeal to fans of Thanhha Lai and Rita Williams-Garcia.
Ages 8-12 | Publisher: Greenwillow Books | Reprint edition | April 7, 2020 | ISBN-13: 978-0062414168
Available Here: Amazon Link
ABOUT THE AUTHOR 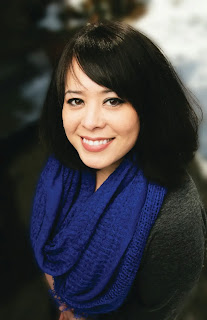 I’m not sure what God looks like. I don’t know if
there’s one big God in heaven or if there’s two or
three or thirty, or maybe one for each person. I’m
not sure if God is a boy or a girl or an old man with
a white beard. But it doesn’t matter. I just feel safe
knowing someone’s listening.
I mostly talk to Saint Rene. His real name is
Renatus Goupil. He was a French missionary who

traveled to Canada. While he was there, he made
the sign of the cross over a kid’s head and they
thought he was spreading curses, so they took him
prisoner and killed him.
I found out about him because on my tenth
birthday, this girl Roberta gave me a book called
Famous Deaf People in History. I would have
never given Roberta a book about Famous Blond
People or Famous People Who Talk Too Much or
Famous People Who Tried to Cheat Off My Spelling
Paper—all of which describe Roberta—but the
good thing was that I found out about Saint Rene.
I don’t know sign language but I taught myself
the alphabet so I made up a sign name for Saint
Rene. I cross my middle finger over my index
finger—the sign for R—and tap it three times
lightly against my lips. That’s one of the first
things I do after I take off my hearing aids for
the night. Then I stare at the ceiling and imagine
my prayers traveling up, up, up and hovering

over my bed until they lift all the way through the
roof. Then I imagine them landing on a cloud and
sitting there, waiting to be answered.
When I was younger, I thought the cloud would
get so heavy that all my prayers would come falling
down and I’d have everything I wished for, but now
I’m eleven so I know better. I still picture them
sailing up, though. There’s no harm in that.
I only pray at night, because it’s my least
favorite time of day. Everything is still and dark,
and I have too much time to think. One thought
leads to another until it’s two in the morning and
I haven’t slept a wink. Or I’ve slept, but not well.
I didn’t always hate the nighttime.
I used to crawl into bed and drift off to sleep,
no problem.
It’s not because of the dark. That’s never
bothered me. One time my parents took me to
this place called Crystal Caverns where you went
underground and couldn’t even see your hand in

front of your face. I wasn’t scared at all. I loved it
down there. I felt like an explorer. Afterward my
dad bought me a souvenir snow globe, only there
are bats inside instead of snow. I keep it right next
to me, on my nightstand, and I shake it before I
go to sleep, just because.
So it’s not the dark that keeps me awake.
It’s the nightmare.
The nightmare goes like this.
I’m standing in a big open field—one I’ve
never stood in before. The grass is yellow and
brown under my feet, and I’m surrounded by
thick crowds of people. Nightmare Me knows who
they are, even though they don’t look like anyone
I know in real life. They all look at me with round
black eyes. Eyes without whites in them. Then
a girl in a blue dress steps forward, away from
the crowd. She says two words: “solar eclipse.”
I know what she’s saying even though I’m not

wearing my hearing aids and she doesn’t move
her mouth. That’s how it is in dreams sometimes.
The girl is pointing skyward.
Nightmare Me looks up to where she’s pointing
and watches attentively, not scared yet. I crane my
neck, along with everyone else. We all watch as
the moon moves in front of the sun. The blazing
blue sky turns gray, then dark, and Nightmare Me
thinks it’s the most amazing thing I’ve ever seen.
It’s strange how nightmares work, though.
Somehow Nightmare Me knows things won’t
end well. As soon as the moon finishes passing
the sun, my blood rushes into my ears and my
palms dampen with sweat. I look down from the
sky—slowly, slowly, not wanting to see—and just
as I suspected, everyone is gone. The whole crowd.
Even the girl in the dress. Nothing moves. Not one
single blade of grass. The field stretches on for
miles and miles. The moon has pulled everyone
away. All but Nightmare Me.

I’m the only person on the face of the earth.
I can’t tell what time it is, but I know it’s late. Like,
past-midnight late. As hard as I want to not think
about the nightmare, here I am, lying in bed and
thinking about it. I shake my Crystal Caverns globe
and watch the bats flutter around. Then I try to focus
on the bumpy paint on my bedroom ceiling. My dad
calls it popcorn paint. When I was a little girl, we’d
pretend the ceiling was really made of popcorn and
we’d open our mouths wide, wide and let it fall in.
“Next time I’ll paint a licorice ceiling,” my dad
would say. He liked to say that Twizzlers were one
of his favorite food groups. I’d shake my head and
say, “Chocolate, chocolate, chocolate.”
It was our routine. But we don’t do things like
that anymore.
I don’t think he knows how to be a dad to an

eleven-year-old girl. You can’t sit an eleven-year-
old girl on your shoulders, especially not when


she’s all knees and elbows and five foot five, and
you can’t make hot chocolate and wait up for Santa
Claus or read picture books.

But it was still nice to remember the popcorn-
licorice-chocolate ceiling.

It’s better than thinking about the nightmare.
I close my eyes and feel the hum of the ceiling
fan against my cheeks. I make a promise to
myself: if I have another nightmare tonight, I’ll talk
to someone and ask for help. I don’t know who.
But someone. Not my mom.
Don’t get me wrong. There are times when my
mom is easy to talk to. If you catch her on a good day,
she isn’t too mom-like. But I can never tell which
mom I’ll get. Sometimes she is overprotective,
overbearing, over everything. I once asked her flat
out if she treated me that way because I’m deaf,
because that’s what it feels like sometimes.
“I’m not overprotective because you’re deaf.
I’m overprotective because I’m your mother,”

she’d said.
But something in her eyes told me that wasn’t
the whole truth and nothing but the truth.
I’m good at reading eyes. Same as lips.
I most definitely don’t want Mom to know
about the nightmare. She’d start asking me about
it every morning and every night and insist that I
see a psychiatrist or something.
Then again, maybe that wouldn’t be so bad.
Maybe then I’d get some sleep.
I close my eyes.
Think of something nice.
The coming summer. Yes. That’s what I’ll
think about. Sixth grade is over and the nice, lazy
summer stretches ahead. Okay, so maybe I don’t
have a gazillion friends to hang out with. So what?
I’ll make my own fun. I’ll explore the woods and
take notes for my zoological diary. Maybe draw
some bird sketches.
There is plenty to do.

I don’t need a gazillion friends.
I don’t even need one.
All I need is me, right?
Solo—it’s the best way to go. 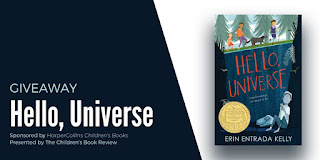 Enter for a chance to win a copy of Erin Entrada Kelly’s Hello, Universe!
Ten (10) winners receive:
Giveaway begins April 7, 2020, at 12:01 A.M. PST and ends April 21, 2020, at 11:59 P.M. PST.
Open to legal residents of the 50 United States and the District of Columbia, who are eighteen years of age or older in their state or territory of residence at the time of entry. Void where prohibited by law.
HarperCollins is responsible for prize fulfillment.


Per FTC guidelines, I disclose partnership with The Children’s Book Review and HarperCollins.
Posted by Carey Hurst at 00:02 No comments: