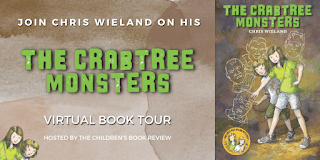 Try this thorny problem: You’ve got this acquaintance who’s convinced he and his whole family are cursed to eventually be hunted and killed by a giant, ghostly dog. It sounds ridiculous, but then, people in his neighborhood start seeing the dog. And they start dying. And cause of death is clearly … dog.

Holy cow! On one hand, there can’t really be a supernatural dog hunting people down, right? But if not, that means someone is making it look like there is. Finding the truth could be difficult … and dangerous. Who’s going to get to the bottom of this?!

I know. It’s Sherlock Holmes, and I’m describing The Hound of the Baskervilles. Bear with me. I’m making a point.

How about … there’s this rich man who dies and wills his fortune to people living in the apartment building you call home (which he owned). To get the estate, you have to solve a series of puzzles he left behind. Oh, and maybe one of the potential heirs (probably not you, but who knows?) is also a murderer.

OMG! Who’s going to solve the puzzles and get the fortune?! And wait, one of your neighbors might be a killer? Is it safe to leave your room?!

Relax. I know I’m talking about The Westing Game, and I know Turtle Wexler is the hero who cracks the puzzles and wins the day. But who is Turtle to you, the reader? Think it over.

One more: Let’s say there’s a group of robbers who targets the branches of a mid westernbank. They not only rob them, but they blow them up. What’s more, the people who live nearby celebrate the robbers as heroes. Then things get messier when the chief of police(who’s also your grandfather) is accused of being one of the robbers himself. Is he? Was he framed? Who are the real robbers, and why are they viewed in a positive light?

Once again, someone – you – have to figure it out. But these are bank robbers. If you get in their way, would you put your life – and the lives of the people you care about – in danger?

You might not know this one. It’s the plot of my middle grade mystery The CrabtreeMonsters, which hit bookshelves in May 2022. It’s a fun read, and I hope you’ll check it out (you can buy it on Amazon or Barnes &amp; Noble, or read it on the Hoopla app at your public library).

In my book, the hero’s name is Kat Dylan. She’s a tough, smart 13-year-old girl detective who’s not afraid to run afoul of the adults in her life if it means getting at the truth, saving her grandfather, or protecting her sk8er boi brother Alec.

But Kat isn’t really just Kat. Like Turtle and Sherlock, she’s a stand-in for you, the reader. Sure, I could say that about the protagonist of any book, in any genre. When we love to read, half the fun is sinking into the shoes of our heroes, seeing the world as they do, and making their heroic journeys ours.

But mystery novels feel different. Mostly because the heroes – Kat, Sherlock, Turtle or any of them – really could be a version of you. Maybe not the version sitting there reading these books (or this blog), but a squint-a-little-and-you’ll-see-what-I-mean version of you.

A version that’s smarter, tougher, more determined. Someone up for the challenge of any puzzle. Someone who’ll laugh at danger (or, if not laugh, at least outmaneuver).

In other words, not the you who’d rather go home for a night of binge watching Netflix. Sherlock, Turtle and Kat have zero time for that. Neither do the other private eyes, cops and talented amateurs on the mystery shelves at your local library or bookstore.

That’s really what separates our detective heroes from us, right? They’re not born of some magical lineage. They don’t have super powers. They live in cities and towns like we do. They’re not necessarily richer or better than us.

They’re just smart. We might be smart, too, but they put it to use in a way we wish we could. They’re tough enough to keep going when things get difficult or dangerous. They don’t quit. Not until the bad guys are stopped and there’s something like justice. Which is good, because those bad guys won’t quit either, unless someone stops them.

In mysteries, even sidekicks are smart, tough and determined. Take Dr. Watson. Is he a blundering oaf? Nope. He’s an MD and author, so smart he actually understands Holmes (most of the time). He’s also a tough former soldier who took a bullet in the war and still seeks adventure. When Holmes springs into action, Watson wants his share.

How cool is that?

This is why I started writing mysteries. I loved the genre’s tropes – the puzzles, villains, the red herrings and double-crosses. But I’m also a dad who wants his kids to have heroes they can look up to and who feel vaguely familiar. I heard echoes of the traits I admire in fictional detectives in them, and I wanted to cultivate that. As I wrote The Crabtree Monsters, my primary editor and sounding board was my smart, fierce tween, who helped me nail Kat’s voice and understand her drive. Going back and forth on the book, Kat became my kid’s alter ego. My kid became more fearless, unafraid to confront injustices at home and at school, unwilling to give up.

Of course, that’s when I learned that inspiring your kid with tough, smart detectives is a double-edged sword. Sure, who wouldn’t want a smart kid who takes on any adversary to do what’s right?

Except … when you’re that kid’s dad, it’s a matter of time before you’re the adversary. And you’re pitted against a tough, smart kid who won’t rest until the bad guy (you) is defeated. Maybe I should’ve made my hero a little less determined. 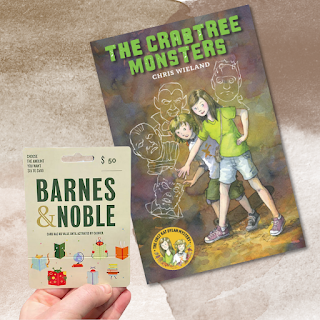 Enter for a chance to win a signed copy of The Crabtree Monsters and a $50 Barnes & Noble gift card!

A signed copy of The Crabtree Monsters and a $50 Barnes & Noble gift card.

A signed copy of The Crabtree Monsters. 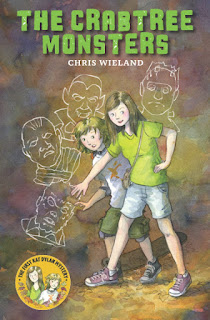 Publisher’s Synopsis: Moving from Los Angeles to tiny Crabtree, Michigan, is the last thing thirteen-year-old Kat Dylan wants to do. Crabtree’s seen better days and isn’t what you call welcoming. Worse, the move means living with her gruff Grandpa Nick, the town’s police chief, and having to look after her little brother, Alec.

And that’s before Kat and Alec find themselves in the middle of a bank holdup by the Monster Gang—four robbers in monster masks. Before the heist is over, the kids lose their cash and Alec comes within a hair of losing his life. When it is all over, Grandpa Nick goes to jail, accused of being one of the robbers himself.

Suddenly, this boring little town isn’t so boring anymore. Kat’s determined to find out who the men are behind the masks, and she’s going to need help. But exposing the robbers could have big consequences. The deeper Kat goes, the more she learns life is about making choices, including some that are a matter of life and death. 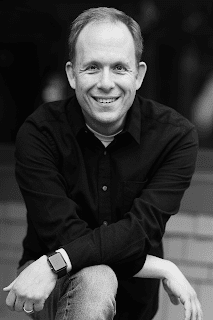 Chris Wieland is an award-winning writer and filmmaker. He is also the father of two fierce children, including a tough, smart tween who helped him find the voice of his protagonist, Kat Dylan. He lives in Southern California with his family.